The Literature Committee's mission is to ensure that every aspect of the GreySheeters Anonymous program of recovery is presented in written form for our members, friends, professionals and the world at large. Our primary purpose is to help another compulsive eater gain and maintain GSA recovery and to carry this message to others. 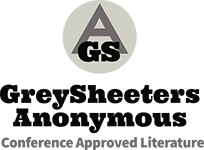 Each literature project is unique. From concept to completion, it may sometimes take several years to produce a final document. Specific steps defined herewith may need to be repeated several times or taken simultaneously. The process may require the expertise of several writers and numerous drafts before a manuscript is approved.

For the complete process, see the GSA Service Manual.

The process begins with the GreySheeters Anonymous World Service Conference (WSC) approval of a concept for development and ends with final document approval. Before the CAL seal is affixed, the manuscript needs approval from the combined members of the GSAWS Literature Committee and GSAWS Board of Trustees (BOT). Three or more negative votes from the GSAWS Literature Committee or Board of Trustees members on the same portion of the manuscript will necessitate a rewrite and further review until the Committee and BOT approve each portion.

Before any piece of CAL is discontinued, it must meet the following criteria.

Once the GSAWS Literature Committee is satisfied that the above criteria have been fulfilled, they will make a motion to the WSC to discontinue the item.