The World Service Conference of GSA has become, for nearly every practical purpose, the active voice and the effective conscience of our whole Society in its world affairs.

In 2008, the GreySheeters Anonymous World Services (GSAWS), Inc. Board of Trustees (BOT) designed the World Service Conference as a structure for groups to communicate with the Board.

The first GSA World Service Conference did not take place until 2013, at which time there were only nine functioning intergroups and many groups were not part of an intergroup, so elected GSRs were invited to serve as conference delegates.

As the Conference evolved, it became clear that the amount of work involved in creating literature, public information, and the website—not to mention archiving it all, organizing the conference assembly, facilitating communication, providing financial oversight, and providing guidance about structure—was far more than 30 people could manage.

In 2019, the Structure Committee has proposed that GSAWS make its "temporary" conference structure permanent. Every group, every intergroup, and the Board of Trustees make up World Services via their elected representatives. This means we have the potential to have approximately 175 people working to achieve our vision.

The diagram below outlines the procedure described in the text. 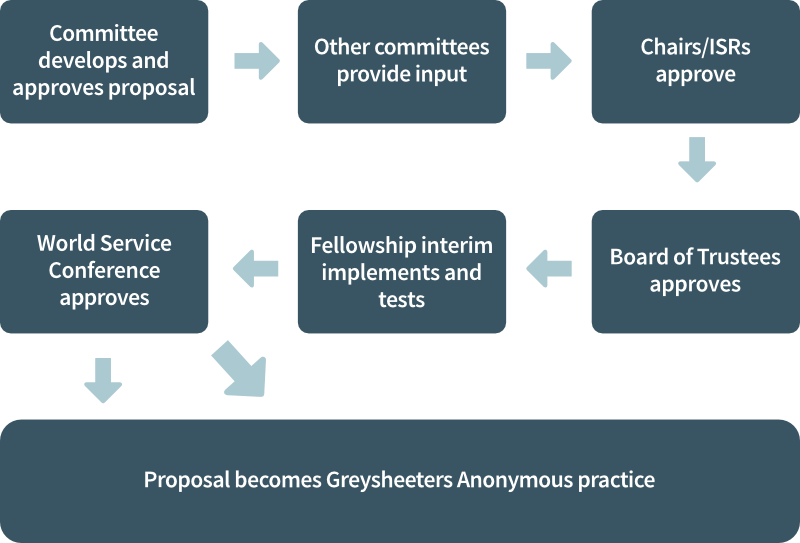 Ideas for new or improved services that affect GSA as a whole can arise from individual members, groups, intergroups, committees, boards, or even from outside the fellowship. When someone raises such an idea, they are encouraged to bring it to the chair of the appropriate committee.

Once a month, the Board of Trustees chair convenes a meeting of the Chairs of World Service Conference committees and Intergroup Service Representatives of the intergroups. Chairs-elect and ISRs-elect are also invited to this meeting. The purpose of this group is to consider the implications of any proposal on each committee and intergroup.

If both the Chairs/ISRs group and the Board of Trustees approve the proposal with substantial unanimity, GreySheeters Anonymous World Services implements the approved proposal on an interim basis until the next meeting of the World Service Conference.

Interim implementation serves two purposes – needed solutions are not delayed until the next conference meeting and interim solutions are evaluated by the fellowship before final approval.

Following the meeting of the World Service Conference, each delegate reports the results to their intergroup or group. The Board of Trustees publishes the minutes of the meeting on greysheet.org. The Secretary adds the final version of the proposal with all approval dates and any amendments to the Service Manual on greysheet.org. The committees undertake any further work required by the proposal, e.g. writing and publishing literature.